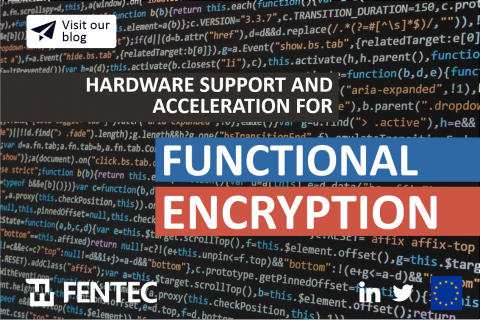 Functional encryption is a powerful new paradigm for encryption. Traditional encryption schemes are all-or-nothing in the sense that having the decryption key gives full access to the corresponding plaintext. Without this key, it is impossible to obtain any information about the contents of the plaintext. Functional encryption, however, allows generating decryption keys that give a limited access to the plaintext. Namely, they allow computing a function f(x) from an encrypted “x” without providing any other information about “x” except the result of this function. Having this sort of fine-grained granularity gives huge advantages compared to traditional encryption, for example, in mitigating risks related to key leakage or improving the privacy of users' data. Unfortunately, such additional power does not come for free.

Functional encryption schemes include a lot of inherent parallelism making them well suited for hardware where this parallelism can be exploited with multi-core architectures. Each core should be optimized for the basic operations of a functional encryption scheme (for example, modular exponentiation) and then, the multi-core architecture can compute these basic operations in parallel. FENTEC will focuson FPGA-based HW/SW codesign accelerators where the heavy computations are accelerated with hardware (that is, in FPGA) and the control and interfacing are handled by software.

Already for a long time, it has been understood that side-channel attacks that exploit weaknesses of implementations pose a serious risk for cryptosystems in practice. As mentioned above, functional encryption may mitigate the risks of key leakage because even finding out the key for computing f(x) does not give full access to the plaintext. Nevertheless, implementation security is still a major aspect even for functional encryption and strong protections against side-channel attacks are required in many cases. One big challenge is that side-channel protections typically come with hefty performance overheads which are added on top of the already high computational requirements. FENTEC has defined three different trust models for the computing platforms in order to structure research on implementation security: